(This article is from the current issue of Playlist magazine, and is shared with their permission and my thanks.)

The natural beauty of the South Carolina lowcountry is a secret to no one.

But perhaps much less known is the vital role that the sea and its natural waterways played in the history of the Palmetto State, enabling it to become an early colonial economic power, enriching captains of both sailing ships and industry and deeply enhancing the already-rich legacy of our home state.

And it’s that enchanting and amazing history that The South Carolina Maritime Museum has set about to preserve and relate to others, an ambitious goal that is being eagerly addressed, especially thanks to a newly-renovated and expanded structure ideally located along the historic Georgetown waterfront, and a focused agenda that is gaining community and corporate momentum.

All of which excites museum curator Justin McIntyre. “We’re thrilled about the opportunities the new structure offers us to expand displays and hosting of events,” he notes. “We have a long maritime tradition that many people don’t fully realize, and we look forward to the chance to make people more aware of just how deep our marine history runs.”

The siting of the venue is significant as Georgetown–which was formally founded in 1729 as South Carolina’s third-oldest city–with it’s convergence of four rivers and access to the sea, was chosen in 1732 as an official port of entry for foreign goods and quickly out-paced nearby Charleston, which was not an authorized import location, leading to local financial prosperity. That economic vitality continued throughout the era as the waterways provided reliable and cheap means of transfer for rice, indigo, tobacco, cotton and other agricultural products, as well as development and expansion of sea-based markets, a trend which continued until the Civil War, which, predictably, slowed economic-based maritime activity considerably.

Like much of the post-war South, Georgetown suffered thru severe hardship—until the late 1880’s, that is, when the value of South Carolina’s old-growth swamp cypress, live oak and long-leaf pine were recognized by northern builders and several lumber mills were constructed along the Sampit River—including the largest lumber mill east of the Mississippi River by Atlantic Coast Lumber in 1900, revitalizing Georgetown so greatly that for the period 1890-1920 it was the busiest lumber port in the entire southeast, where the east coast’s last three and four-masted sailing schooners hauled timber to multiple northeastern ports. Not coincidentally, at this same time, The Clyde Line established regular passenger and cargo service between New York and Georgetown, further heightening Georgetown’s image as a Southern port of note.

But with all of the history that Georgetown has in its past, it’s the artifacts contained within the walls—and on the grounds—of the SC Maritime Museum that attract the attention, inspire the imagination and make one ponder the past. And what a collection they have amassed.

Perhaps their prize piece is their Fifth Order Fresnel Lens, the original light installed in the Georgetown Lighthouse in 1870 and operated for over a century, guiding ships into Winyah Bay. The lens was removed when the lighthouse was automated in 1986 and subsequently displayed at the US Coast Guard’s 7th District Headquarters in Miami. But thanks to some folks looking to get her “back where she belongs”, the light, which many feel is “priceless”, was returned to the museum in 2014 and placed in a lighthouse lantern display case custom-built to mimic, within space restraints, the design of the original Georgetown light.

But the Fresnel Lens is simply the beginning as the entire SCMM space—as well as the exterior area, which features anchors and a giant propeller—is a treasure trove of photographs, models, and brass artifacts such as portholes, rudder supports, bridge telegraphs, pedestals, helms, signal lights and launch sights. There’s even an early British Marconi Echometer anti-submarine ASDIC system, circa 1930’s, utilized by British fishing trawlers to hunt down killer German U-boats along the East Coast, all on loan or donated by craftsmen, collectors or divers. 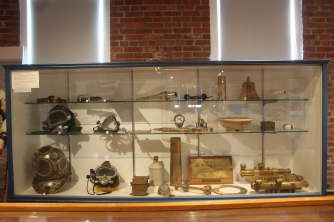 There is also an area set aside for display of remarkable prehistoric remains, including massive megalodon shark teeth, some measuring nearly a half-foot in slant-height, certain to fascinate kids from seven to seventy.

The Museum also delves deeply into significant events, such as the thrilling tale of Robert Smalls. Smalls was born a slave and became a pilot on the CSS PLANTER, a Southern steamer primarily built to transport cotton along the Pee Dee River. Leased to the Confederacy during the Civil War to ferry supplies to and from Charleston, Smalls, who remained pilot of the ship, along with a small group of seven others and their families, plotted a midnight escape and slipped out of Charleston harbor, past Fort Sumter, and into the hands of the blockading Union fleet. For his actions, Smalls was deemed a hero and went on to aid the Union effort in Charleston, before delivering the PLANTER to Philadelphia for an extensive wartime overhaul. Unable to either read or write when he first arrived in Philadelphia, Smalls later became the first black man to command a US naval ship, and went on to serve in the SC House of Representatives, the US House of Representatives and the US Congress.

The SCMM also spotlights the sinking of the Harvest Moon, a Union flagship, in Winyah Bay by Confederates on March 1, 1865, a wreck whose smokestack continues to show above the waterline at low tide even today. Considered by many to be a rare Southern naval victory, some argue that it was more likely a case of lucky nautical guerrilla warfare when a mine was hurriedly constructed and towed into her path in the early hours before her morning departure for Charleston, or that the Harvest Moon struck a torpedo placed much earlier when Winyah Bay was mined prior to surrender to Union forces. Who’s to say?

“Either way,’” curator McIntyre points out with a gleam, ”it’s a great story, and another excellent example of our maritime history, the heritage we’re seeking to preserve and promote.”

And with that ambition, the goal of the SCMM far exceeds mere static exhibits, but includes plans for far-reaching educational efforts such as increasing their resource library, incorporating interactive materials for all ages, adding additional “History For Lunch” talks featuring historians, adventurers, and coastal experts, enlarging youth sailing programs, and expanding community-involvement events.

The SC Maritime Museum is perfectly located along the HarborWalk on the Sampit River at 729 Front Street in Georgetown, conveniently within walking distance of a multitude of other entertainment options, including the Rice Museum, the Kaminski House Museum, and numerous parks, boat tours and cruises, and shopping, as well as an abundance of varied dining options, offering waterfront deck or sidewalk seating.

In short, there’s something for everyone.

So, ahoy, mates! Load ye vessel and set sail for Winyah Bay and a visit to a time capsule of our coastal past. It’s in our mud; it’s in yer blood. Discover The South Carolina Maritime Museum and enjoy a modern nautical day along the waterfront in the process.

The SC Maritime Museum is open Monday-Saturday, 11:00am-5:00pm; Admission is free. For more information contact them at 843-520-0111, or visit their website at: SCMaritimeMuseum.org.

One thought on “SHIPS AHOY! The South Carolina Maritime Museum Brings Our Nautical Past to Life”