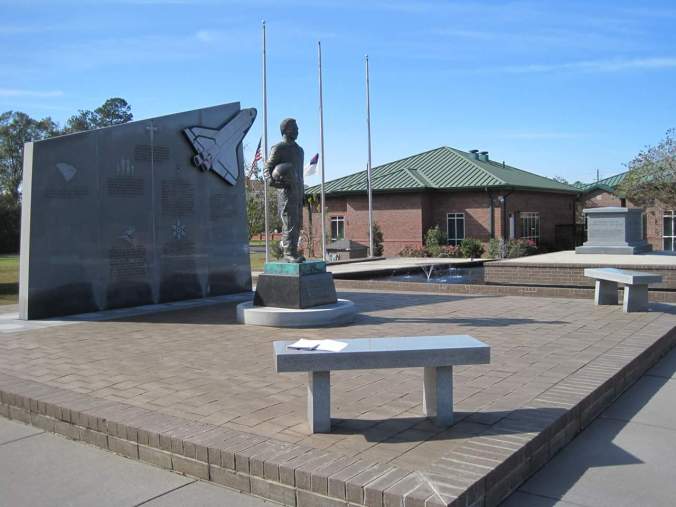 “We are not makers of History. We are made by our history.”

Obstacles, to the truly committed, the truly confident, or the truly blessed, are simply opportunities; challenges, just special chances for them to shine.

And they prove it. Over and over again.

One day, back in the summer of 1959, a curious young man desperately seeking knowledge about science and math decided to visit the Lake City, SC library, perhaps unaware that the color of his skin represented a far wider social chasm than the gaps in his mental database. With the librarian sternly watching, he proceeded to walk the row after row of books until he found two that addressed his curiosity—reportedly one about advanced science and another about calculus—and took them to the check-out counter.

Today, that very building is named after that young man, who grew up to become NASA astronaut Dr. Ronald E. McNair, who was lost along with six others when the Space Shuttle Challenger exploded just after liftoff on January 28, 1986, and is the home of the Dr. Ronald E. McNair Life History Center, housing artifacts, relics, and other items related to McNair’s life, as well as a classroom setting to aid in educating visitors.

And what a life it was. Born the second of three sons to Pearl and Columbus McNair in Lake City on October 21, 1950, Ronald McNair grew up battling segregation in the the South in the turbulent 60’s, yet never wavered and was a valedictorian graduate of Carver High School; received a Bachelor of Science degree in Engineering Physics—magna cum laude, no less—from North Carolina A&T State University, and a Doctor of Philosophy in Physics from Massachusetts Institute of Technology; an honorary Doctorate of Laws degree from North Carolina A&T State University, an honorary Doctorate of Science from Morris College, and an honorary Doctorate of Science from the University of South Carolina. McNair also received nearly two dozen fellowships, and was a renowned expert in the field of laser physics. 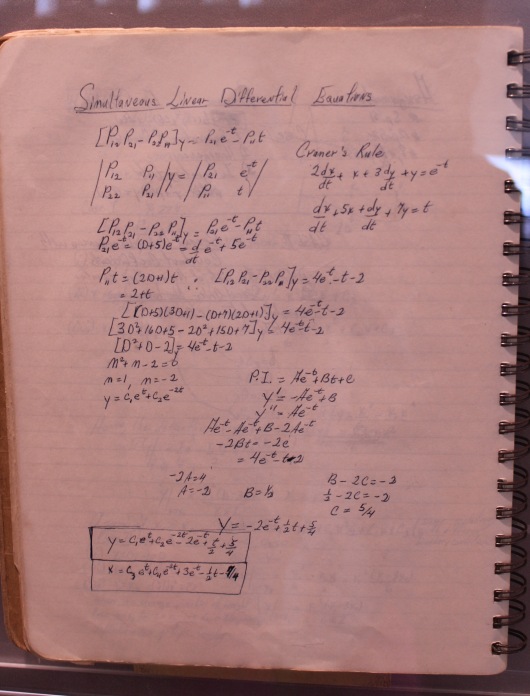 A school physics notebook where a young Ron McNair was working on simultaneous linear differential equations.

McNair was selected by NASA as an astronaut candidate in January of 1978 and flew his first mission aboard the space shuttle on Flight STS-41-B in February, 1984. The Challenger flight was to be his second into space.

That tragic flight, and McNair’s memory, are commemorated in a most touching and fitting manner by the Dr. Ronald E. McNair Memorial Park that is in front of the Life History Center. The result of planning that began back in 1989, the Memorial Park features a monument to the flight with a Scroll of Honor, fronted by a bronze statue of Dr. McNair; a mausoleum and mastaba—surrounded by water and fountains, with engraved quotes from McNair, along with an eternal flame—were added in 2004 when his remains were relocated from their original burial site five miles west of Lake City. A 5K run and celebration are held the Saturday before McNair’s October birthday to observe his memory.

But that is about the past, and, according to Clyde Bess, who as a schoolmate of McNair knew him well, McNair was always looking ahead, rarely content to rest on the laurels or achievements of yesterday or yesteryear.

“He was a doer, a real go-getter, always ready for the next challenge” Bess notes about McNair, who excelled at nearly every activity that drew his interest: academics, sports, or music, becoming a 6th-degree black belt in taekwondo, and also an accomplished clarinetist and saxophone player. Bess adds that McNair wanted to play the sax in school—but the school didn’t have one, so McNair took up the clarinet instead—and became proficient at that instrument until a saxophone became available. “Nothing seemed to slow Ron down,” Bess says with a smile, shaking his head.

McNair plays his sax in space aboard the Challenger on his first Shuttle mission in 1984.

Bess, who serves as the unofficial curator of the Center, knows that its primary goal is one that McNair would embrace: expanding the horizons of youth. “We have school groups and vacation bible study classes and field trips and that type thing, and I encourage more teachers to get in touch with us and bring their kids over,” Bess said noting that a group, the ‘Freedom Readers’ from Georgetown, was due to visit soon. “Ron proved that the sky is still not the limit. So that’s our goal, to get kids thinking, to stir their imaginations.”

“Our regular hours are a little limited, but we can be here any day, at any hour, for however long we need. Call anytime,” Bess says, adding that it’s always best to call ahead to prearrange tours or visits for large groups, or to set up special age-specific programs. “We’re proud to carry forward with Ron’s mission.”

But if you can’t soar among the stars, then BE one. That’s what Pee Dee native John Birks “Dizzy” Gillespie proved possible.

Gillespie was born in Cheraw on October 21,1917, the youngest of nine children to James and Lottie Gillespie. Given that his father was a bandleader, Dizzy had access to musical instruments at an early age and was playing the piano by age four. Despite the death of his father when Gillespie was ten, he stayed the musical course and taught himself to play the trumpet and trombone by age twelve, and later received a musical scholarship to the Laurinburg (NC) Institute. Listening to the radio, he fell in love with Jazz music and, after the family moved to Philadelphia, Dizzy decided to pursue his dream of becoming a professional jazz musician.

And what a career it was as he went on to play with and write music for some of the most influential musicians in the Big Band and Jazz worlds, such as Woody Herman and Jimmy Dorsey, or Ella Fitzgerald and Cab Calloway, as well as musicians of other genres, and played a role in helping spur several musical movements such as Bebop and Afro-Cuban.

Gillespie was best known for his unique trumpet, which had a 45-degree bend in the bell—possibly the result of a fall by an inebriated reveler during a party; many explanations exist—and grew to be one of Jazz music’s most innovative and lovable artists, known around the world, almost as famous for his puffed-out cheeks, his consistent good nature and sense of humor, as he was for his musical talent and ground-breaking style. And his pride of his home never wavered as rare was the concert or show he played that didn’t begin with his stating with pride, “I’m Dizzy Gillespie and I’m from Chee-raw, South Carolina!”

Gillespie remained active throughout his career, in 1989 playing 300 shows in 27 countries, 100 US cities in 31 states and the District of Columbia, headlined three television special, performed with two symphonies, and recorded four albums—all at age 72. In total, Gillespie gave special performances for eight US Presidents. Just a few of the many awards and honors he received were innumerable honorary doctoral degrees, a Lifetime Achievement Grammy Award, a Kennedy Center Honor, the Duke Ellington Award, and inclusion in the Latin Music Hall of Fame.

To commemorate his 85th birthday, the Town of Cheraw, along with supporters, erected a seven-foot bronze statue of native son Dizzy playing his trademark bent trumpet, cheeks puffed, on the Town Green, and the old Gillespie home site is now a designated park boasting student-designed, stainless-steel benches, as well as a stainless fence which bears the musical notes to one of Gillespie’s best-known hits, “Salt Peanuts.” 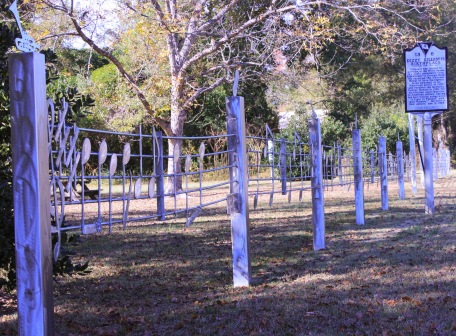 Every October, in conjunction with Dizzy’s birthday, the Town of Cheraw hosts the South Carolina Jazz Festival, a multi-day event which features music, art, history, food, folks, and fun, with the recently completed 2017 festival marking what would have been Dizzy’s 100th birthday.

And one of the annual attractions in the SC Jazz Festival is the Southern African American Heritage Center, a remarkable repository of African American artifacts and relics that Felicia Fleming-McCall has collected and placed on display in Downtown Cheraw, a year-round resource that McCall operates as both a museum displaying authentic cultural items and a learning center to educate others about the region’s African American legacy.

A graduate of Gupton-Jones Funeral Service in Atlanta, Flemming-McCall returned to Chesterfield County, where her family operates three Flemming Funeral Homes and Unique Florists, to join the family business. A life-long history buff, her work with grieving families and helping them remember the lives of deceased loved ones made her realize that she had the opportunity—and the desire—to preserve not only those memories, but items that reflected or represented the culture of all Pee Dee African Americans. Thus, the idea of the Heritage Center was born. And Flemming-McCall was off and running.

Today, the Center, which was officially opened in April, 2011, is literally bursting at the seams, packed and stacked with items from the 1800’s thru the 1900’s and on up until the current day, ranging from items used during pre-Civil War days to quilts, clothing and other home and kitchen materials to a classroom setup to rare and historically significant documents to a multitude of Dizzy Gillespie-related material. 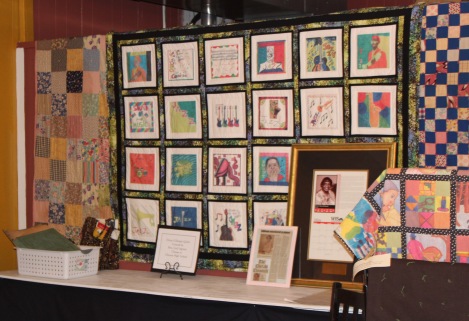 In addition to being active in the community and a part of the SC Jazz Festival, the Southern African American Heritage Center is also listed in The Green Book of South Carolina (www.greenbookofsc.com), a travel guide to African American cultural sites within the Palmetto State, based upon a book for black travelers first published by New York postman Victor Green in 1936.

Moreover, Mrs. Flemming-McCall, who is a member of the South Carolina African American Heritage Commission, also travels off-site, along with artifacts and relics, if necessary, to deliver age-specific programs and presentations to school, church, civic, or social groups. Flemming-McCall also works with local youth stressing the importance of proper social skills, teaching etiquette, table manners, comportment, and how to generally conduct oneself in a social environment.

“We will do whatever is needed, travel wherever we’re asked, and tailor our message to whatever the audience, so that our message is heard clearly and with passion,” Flemmimg-McCall points out, noting that the following day she would be working with members of the SC-ETV program “Gullah Gullah Island” on a project. “We simply want others to recognize the importance of recognizing our heritage, and then protecting it. We are the products of our forefathers, and our future is in our children’s hands. Their past must be as important to them as their future. Because the future belongs to those who prepare for it today.”

Information about the Dr. Ronald E. McNair Park and Life History Center may be obtained at: 843-374-0046, or at www.lakecitysc.com/visiting/science-nature/ronald-mcnair-life-history-center

Information about visiting the Dizzy Gillespie sites may be obtained at: 843-537-8425, or www.cheraw.com/about_cheraw.php?About-Cheraw-Town-History-Dizzy-Gillespie-in-Cheraw-10

Information about the Southern African American Heritage Center can be obtained at: 843-921-9989, or http://www.southernaaheritagecenter.org/