To paraphrase Lennon and McCartney, I guess we’re talking ’bout a revolution.

That sure seems to be what took place Tuesday night when the Earth shook and the heavens opened up and the planets aligned and whatever else it took for the most astonishing and unpredictable political story of your life – before or evermore – played out and a man who had never before run for political office nor held actual military rank, one Donald J. Trump, rode a silent wave of “we’re sick and tired and we’re not gonna take it anymore” voter disdain all the way to the White House, capping off a 16-month campaign that stumped both seasoned politicos and political “experts” alike at every step.

And thus ends the long and arduous road to the Oval Office that we’ve all traveled together this last year and a half.

At least for four years. I hope.

Please tell me it’s over.

And boy wasn’t this election a doozy? I won’t even get into the primaries and Uncle Bernie and grown men talking about hand sizes and all that; the general election was plenty chock full of good old character assassination and spitefulness, exaggeration and outright lies. And that’s not even counting the factually documented incidents that were brought to light – to our delight or distress, depending upon or chosen “side” in the contest, of course.

But for all the allegations leveled at Trump regarding possible sexual assault, with charges yet unfiled, and perceived anguish about his tax returns or where his ties or campaign caps were produced or steel to build his hotels was manufactured, Trump displayed an agility and astuteness that served him well in his campaign.

As an outsider to the political process, Trump was among the first to sense a great and building unrest among the unprotected American working class who were nearing revolt at the legislative directives and executive orders being imposed against them by the protected elitist class.

Trump also had the insight and foresight to see that the American middle class was being directly affected by a number of issues and he embraced them as a group, forging a bond with voters and becoming their “spokesman” on issues that mattered to them, such as economic growth, wage stagnation, job creation, illegal immigration, and public safety, especially the existential threat of radical Islamic terrorism.

And of course he was helped along considerably by Director James Comey of the Federal Bureau of Investigation, who couldn’t decide if he wanted to hold Mrs. Clinton up for prosecution and scorn, or just scorn and innuendo – for ten long, crucial days late in the campaign.

You’d have to be living under a rock to think that Comey’s “She’s under investigation,” then, ten days later, mea culpa, “Oops, sorry, nope, nothing to see here. My bad.” act didn’t have a big impact on Clinton’s campaign. And a potentially crippling one, at that. Put simply, it was patently unfair. The FBI had no business interjecting themselves into this election unless they were ready to issue indictments or summons, and to do so was just wrong. Plain and simple.

The simple fact is, Hillary Clinton has enough stuff out there on videotape to make obvious that she has, as a Southern Gentleman might say, a slight credibility problem. And my southern upbringing precludes me from any further discussion of some of the tidbits of information that WikiLeaks laid on us, other than to say that I don’trecall the validity of any of them ever being seriously challenged.

And Hillary did make a few missteps, at least as far as I can tell. Seems to me that she tried too hard to control everything. And she seemed to be inaccessible. You never saw her do any interviews. During the debates she’d usually just spin the question around so she could rattle off the canned spiel. Just being the consummate politician is all; that’s been her stock and trade for 30 years; it’s all she knows.

And when the tide turned against her and she had to play defense to shore up positions she thought to be safe, some felt that she actually alienated some voters by associating herself with stars and Hollywood A-listers, even hosting concerts that many saw as desperate pandering to specific segments of voters.

Regardless, through a culmination of events Clinton became the poster lady of one of “them” in a year when too many Americans were fed completely up with “them,” which cracked the door open for Trump to offer that classic salesman’s line: “Give me a shot. Whatta ya got to lose?”

So America, being in the market, looked him over, kicked the tires, and took him up on it.

And if we don’t like what we see, in four years we’ll trade him in and pick us out a new model. It’s the American Way.

But for now, trust me on this: the global political world is entirely changed today. From here to Moscow, from Paris to Peking, and from Havana to Hong Kong, the world knows that a new America is about to hit the world stage. And she has a fresh, new, in-your-face New York style that may take a little getting used to. 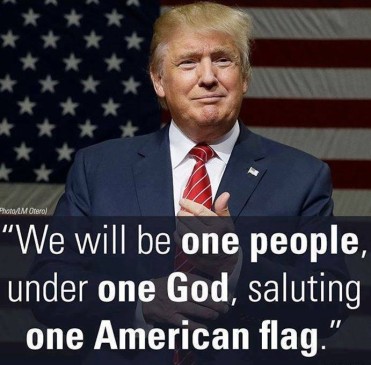