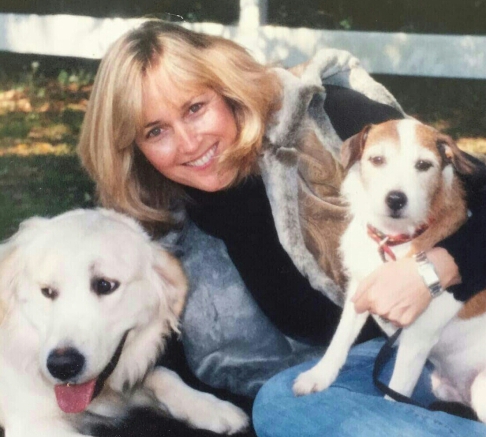 I first met Heidi Holbrook in the summer of 1979 following my freshman year at the College of Charleston and as she was attending a summer orientation program prior to beginning her freshman year at CofC later that fall. I first encountered Heidi by chance as she was sitting with some friends on the steps of 2 Bull Street, the CofC dorm house where they were residing. I was working at the local Miller beer distributor and serving as Miller Brewing Company’s Campus Representative and living in the Pi Kappa Phi fraternity house on the other side of campus when a service call to the Student Center had me parking near her residence. Maybe it was a man in uniform—yeah, right—but we exchanged a few pleasantries in passing, so I stopped and we made introductions and small talk for a few minutes before saying “Good to meet ya” and moving along.

But that was all it took. To say that I was merely smitten with that long-legged, light-haired young lass with the bright eyes and quick laugh, to whom everything was a “hoot,” would have been a gross understatement. I started to spend more time over on that side of campus and got to know Heidi a little better and hang out with her and her gang a little more. And while I soon discovered that she had a boyfriend, I knew he also had a problem. Because I had a plan. As her summer session came to a close and Heidi’s return to her home in Spartanburg drew near, two things became ever more clear: 1, This girl was fun, and, 2, I couldn’t wait for fall semester to begin.

Well, fall did finally come and Heidi and I did finally get to know each other better. It was probably as much the irresistible force at work, a kind of water wearing down granite effect, as anything; the poor girl really had little chance. I can be a pretty persuasive guy. And persistent, to a flaw.

Heidi and I had some great times together, and some of the funniest experiences as well. And she was there for some tough times, too. Like during Hurricane David in 1979 when, following knee surgery I was unable to evacuate so she stayed with me in Mt. Pleasant, knowing full well that her parents were going to be upset that she didn’t move inland to ensure her own safety. And Heidi being Heidi, she stocked up for us before the storm by running to the store and getting a do-it-yourself pizza—in a box, with the power likely to soon go off!—and some cookies. Then angered my roommate, who at the last minute also decided to stay, by idling away the time by spelling out “HELP” backwards on a window in masking tape, which led to an interesting debate about what an individual in crisis would do: take the time to tear tape and spell, or just bust out the window, as Heidi contended with great vigor. I laugh now at the memory.

Speaking of her parents, the fact that they even allowed me to see her speaks volumes about their trust in their kid. They were beyond special. He was an executive in the textile field and as I recall, would come home for lunch and shave, just to look nice and sharp, especially for his wife, with whom he was known to share a dance around the kitchen. And these fine folks accepted me, the college beer salesman, site unseen, And the first time we did meet was at the tail end of Spring Break 1980, which I’d spent aboard a couple houseboats in the Florida keys with eight fraternity brothers and the 6′ 8” center of the CofC Cougars basketball team. Thru a strange turn of events, a Pi Kapp brother and I ended up delivering a college friend from Ft. Lauderdale to her parents’ home in Spartanburg and an impromptu meeting of the Holbrooks was arranged. I’ll never forget buying a pair of nail clippers at Revco to perhaps enhance my outward appeal while awaiting Heidi’s arrival…like that was going to salvage my general appearance after living life aboard a boat at sea for a week. I can’t imagine what they must have thought of me. Or the prayers they prayed afterwards.

In hindsight, that might have played a role in Heidi going over to Switzerland later that summer to be a nanny for, as I recall, the children of her dad’s employer. Regardless, we did end up with an ocean between us. And truth is, she was too good for me at the time.

Anyway, as is the case with most young loves, time moved along and Heidi and I moved on to other relationships. In fact, she later dated a fraternity brother, and was seeing him when we both were in my sister Sandy’s wedding a couple years later, but that was cool too and we never stopped caring for each other. And we never stopped making each other laugh either. That was special…because she was.

I eventually left the Charleston area and moved around, a lot, rarely staying in one place for long, while Heidi simply moved across the Cooper River and set her roots down in the beautiful and historic Olde Village section of Mt. Pleasant. A perfect match if ever there were one. And in time, she met a fine gentleman, Michael McCormick, whom she describes as “a wonderful man,” and they married and set about building a life together. Being without children of her own made things easy for Heidi as it allowed ALL children to be hers, and while it is said that dogs are man’s best friend, according to those closest to her, Heidi is a dog’s best friend. And every life Heidi touched, human or animal, she impacted.

Meanwhile, all the while, life’s clock ticked on and the calendar pages flipped and the years flew past until one day earlier this year, through the magic of social media, through a friend of a friend, we reconnected and exchanged a couple of “How are ya?” messages, and over the next couple months we “talked” via Messenger on occasion, mostly about my writing, which she’d always enjoyed, or something she’d seen on my blog, or some old memory. I always thought it was pretty cool that, after almost 30 years of no contact at all, we were able to able to re-establish our friendship so easily.

Now I think I know why.

Today Heidi Holbrook McCormick needs all the friends—and prayers—she can get as she is resting in her beloved Mt. Pleasant home, as upbeat as possible and courageously battling an aggressive glioblastoma, a diagnosis made just a few short weeks ago that, despite surgery and the best care and treatment, has resulted in a very bleak prognosis. And it breaks my heart that this loving and caring lady, the light of so many lives, and I imagine the center of husband Michael’s world, is facing this dark reality.

Circumstances like this can make one ponder the very things that make up the foundation of our lives. But ours is not to question “Why?” in matters such as these. Instead, I choose to thank God for having given me the gift of having met Heidi and the pleasure of all the memories that I have always and shall forever treasure. And to give Him special thanks for allowing me the opportunity to enjoy her spirit once again.

Thoughts and prayers, my dear Heidi. And thank you.

Until we meet again…

An update from Andrea Holbrook Colton:

Thank you for all your support, prayers and fond memories of such a wonderful person who is now one of God’s most precious Angels.

2 thoughts on “MARLBORO MUSINGS: I Know A Girl”